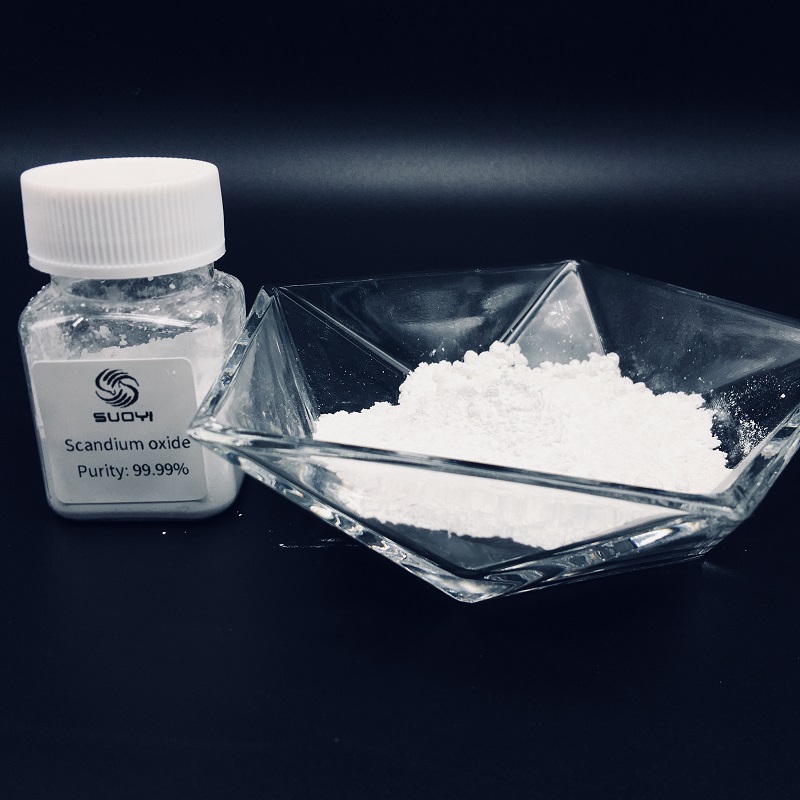 Use:
Applications in alloys

At present, the aluminum-scandium alloy (Al-Sc) made of scandium and aluminum has

plasticity, corrosion resistance and thermal stability. Therefore, it has been well used in

the structural parts of missiles, aerospace, aviation, automobiles and ships, etc., and

gradually turned to civilian use, such as sports equipment (hockey and baseball sticks),

computers and mobile phone shells, etc. It has the characteristics of high strength, high

rigidity and light weight, and is of great practical value.
Scandium mainly plays the role of modification and grain refinement in the alloy, which

performance. Al-Sc alloy has formed a series of alloy series, such as Russia has reached 17

kinds of Al-Sc series, my country also has several alloys (such as Al-Mg-Sc-Zr and Al-Zn-

Mg-Sc alloy). The characteristics of this type of alloy cannot be replaced by other

materials, so from the perspective of development, its application development and

potential are great, and it is expected to become a major application in the future. For

example, Russia has industrialized production, and it is used for light structural parts to

develop rapidly. my country is also accelerating its development and application,

especially in aerospace and aviation.

material is made with NaI, and processed into a scandium-sodium halogen lamp for

action of high-voltage electricity, the scandium spectral line is blue and the sodium

spectral line is yellow. The two colors cooperate with each other to produce light close to

sunlight, so that the light has high luminosity, good light color, energy saving and

longevity. It has the advantages of long and strong fog breaking power.

The emission power of the third-generation laser made of it is 3.0 times higher than that

of the laser of the same volume, and it has reached a high-power and miniaturized laser

performance of the laser. When preparing single crystal, each charge is 3kg-5kg, and the

kind of laser in military technology is becoming more and more extensive, and it is also

gradually promoted to the civilian industry. From the perspective of development, it has

great potential for military and civilian use in the future.

thickness of 1 mm on the upper end of the cathode of the color tube, and then disperse a

layer of Sc2O3 with a thickness of 0.1 mm on it. In the oxide layer cathode, Mg, Sr and Ba

electrons are emitted to make the phosphor emit light. Compared with the cathode

without Sc2O3 coating, the current density can be increased by 4 times, making the The

TV picture is clearer and the life of the cathode is increased by 3 times. The amount of

Sc2O3 used for each 21-inch developing cathode was 0.1 mg. At present, this cathode has

been used in some countries in the world, such as Japan, which can improve the market

competitiveness and promote the sales of TV sets.

Write your message here and send it to us